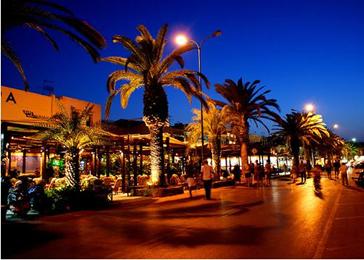 The beautiful Rethymno, a traditional and picturesque city which leaves no visitor untouched, is at the north coast of Crete. In Rethymno you will see the famous Fortezza fortress, the church of the Lady of the Angels, the Agios Fragiskos church as well as various other buildings, mosques and monasteries that witness the Venetians and the Ottomans were on the island in the past. Rethymno has got several settlements by the sea and organized beaches where you will find equipment for countless water sports. Agia Galini, Adele, Panormos are just a few of the most touristic settlements of Rethymno while Hrysomonastiri, Prasies and Margarites are villages with traditional architecture and monuments. During summer, you will definitely be impressed by the several festivals that take place in the prefecture and by the frantic jags of the Rethymno locals. You will find traditional handmade woven textiles and wooden sculptures. Moreover, it is worth visiting the History and Folk Museum as well as the Archaeological Museum. The food in Rethymno, as in the whole Crete, is excellent. The restaurants and taverns stay open until late at night and after dinner, the fun begins in Rethymno which lacks nothing compared to other cities. The clubs offer nice cocktails, loud music and dancing until early in the morning. Rethymno is waiting for you and all you have to do is book your ferry tickets now.

There are regular and frequent ferry departures from the port of Piraeus for Rethymno. Book your ferry tickets online via aktoploika.gr and travel to Crete comfortably and without a care. The journey from Piraeus to Rethymno lasts about 10 hours. Even before the ferry docks to the port, you will see the Venetian walls and once you reach the port you will find several traditional taverns, restaurants and cafes.

Connection with other ports

You can now book ferry tickets online for Rethymno via Aktoploika.gr. If you plan to travel during July and August, it's best if you have booked several days or weeks earlier to avoid hitches. You should also know that round-trip/return ferry tickets come with a considerable discount.

Transportation
There are bus stops in the center of Rethymno from where buses depart every hour for the surrounding areas as well as for the rest of the cities in Rethymno. Moreover the local buses can take you quickly and comfortably to the beaches and the villages of Rethymno. In Rethymno you can very easily find a taxi, in fact once you reach the port, you will find several of them parked to take you wherever you wish. You can also access some of the beaches in Rethymno by boat. However, if you plan to explore the whole island the easiest way to get to the surrounding beaches as well as the other prefectures and villages of Crete is definitely by some vehicle. In Rethymno there are several car and motorbike rental agencies where you can rent a vehicle and go everywhere easily and comfortably. In fact, if you book the vehicle of your choice online it is certain that you will have no trouble at all finding one during your holidays.

Rethimno's urban bus lines make moving in the city very easy, as well as interurban buses, connecting the city with the rest of Crete. The Interurban Bus Station is located at Kefalogianni Ave., To move from the Port to the Bus Station, you'll have to use the bus (starts right in front of the Port), especially if you carry luggage. For routes in Rethimno the ticket costs 1.20 euros.

The look ... of Psiloritis!

Psiloritis, mitata, sounds of Cretan Lyre in Anogia, the Zeus Cave, wildflowers on the plateau of Nida. Raki with meat, accommodations with stone and wood and streets of herbs. Hiking in Psiloritis, diving in the Libyan Sea, legendary caves. Here you will feel the breath of the mythical past of Crete. Mountainous and wild, the prefecture of Rethimno has historically formed a simple and self reliance character. The traditional husbandry economies of mountainous villages still survive. Its well known monasteries, centers not only of devotion but also of resistance to the conqueror, are one of the brightest pages of its history.

The old town of Rethymno, with its picturesque but also touristic port, will require several hours for a walk which is worth to be taken. Fortetza, on the hill, is kept in very good condition and it's worth to wander around. The Neratze Mosque, due to its excellent acoustics, today serves as a conservatory. And it isn't the only mosque that survives. Together with three other mosques, there are many historical churches, from the time of Venetian hegemony, as St. Francis, the Small Virgin, Saint Antonios, showing the multiple historical periods of the town. But perhaps more than the fortress settlements and their worship spaces, it's worth to stroll through the old town, seeking the fountains that were occasionally set up by people who wanted to give to their neighbours the precious commodity of water.

First of all of course, the Rimondi fountain with the three lion heads, sign of the  Venetian origins, which continue to flow generously for centuries. Even now, various taps, dry already, mainly ottoman, fitted in old buildings, decorated with Arabic calligraphies, honoring the memory of a forgotten ancestor. It's also interesting the Venetian arched bridge over the Grand River, at Preveli. In Argirupoli survives, in addition to the archaeological remains, the network of the  paved paths. One of these is identical to the E4 trail and leads to the site of the roman cemetery, in the position Five Virgins. In Spili, you can admire the fountain with the 17 lion heads, from which the water runs for centuries.

In the most mountainous prefecture of the island dominates Psiloritis (2456 m), occupying its eastern part. The area of Rethymno surrounded and defined by Sierra Cedars, Kulukonas, Vrisinas and Krioneritis, the easternmost peak of the White Mountains. The range of mount Kedros (1,777 m), that grows in the south west of Psiloritis, delimits together with it the beautiful valley of Amari. The mountains are divided by steep gorges, lush green valleys and small rivers. Lowland areas stretch only in the northern coast and between the mountains. The rivers give a very small amount of water that's why it's priceless for the rural communities. Geropotamos starts from the area of Milopotamos to slop to the west of Panormos, Megalos Potamos flows into the Preveli lake.. Six plateaus, approximately 40 ravines and dozens of caves, compose a very complex landscape. The inaccessible mountains and the isolated valleys were allowing since years a wind of freedom blowing among them, shaping the psychology of their inhabitants.

From the forests that once were covering Crete, a few have survived. One of these is the primeval forest Vrulidia, near the village Anogia, with huge oaks.  The Preveli lake, the Libyan Sea, among the most important monuments of natural beauty of Rethimno, and the river that feeds it, compose a landscape of impressive beauty. The Gius Field is a beautiful plateau, at an altitude of 700 m, near Spili and Kissos, which in the spring is full of orchids. The southern beaches are excellent. The beach of St. Paul with the dunes reminds a desert but ... with the sea next to it! Triopetra, with the three characteristic rocks, has amazing turquoise waters. Ligres, with fine black sand, is a very quiet beach . The Amari Valley is very beautiful and is a miniature of  the traditional rural Crete. Dozens of picturesque villages, dense crops, old Byzantine and Venetian buildings, streams with Sycamore trees and deep gorges, compose a magnificent landscape.

Rethymno  "musts"
Kapsaliana village is only 4 kilometers away form Arkadi and it's definitely one of Crete's hidden diamonds. It's a preservable Venetian settlement, whose core is a 1763 oil press. Accommodation is a little bit of expensive there, but if you stay just for a few days, you'll definitely find many interesting ways to pass the time. There are countless paths to walk in nature, a lot of activities available in Triopetra, while you can cross the spectacular Patsou Canyon.

Atsipopoulo village is tight next to Rethimno city. The place's scenery is similar to a movie's, as it was built during the Venetian Times. Enjoy walking through the beautiful alleys, choose to sit on one of the many spots with great view on the sea and don't forget to visit "Mistrakis Bakery" to buy some authentic Cretan rusks.

The Venetian Maroulas village is 10 kilometers away from Rethimno city, and it's over 500 years old. The buildings' architecture will surely take you in the doges' knights' and magicians' years and the big tower, about 44 meters tall, will become the perfect scene for some souvenir photos.

Driving conditions on Crete's roads are similar to Greece's most provincial roads. There are droves of animals, that you'll surely meet on a turn, wild animals that appear in the middle of the road, careless, hurried locals, who probably ignore the Highway Code. Choose to drive slowly, to avoid unforeseen incidents.

Locals treat anyone they meet or is sitting next to them, especially in villages. Their treat refusal is a kind of a snub for them.

Shooting is the locals favorite habit, in weddings, engagements, christenings, funerals, parties. Don't be afraid, but make sure you are outside their shooting range.

Happy holidays! Crete is waiting for you!

Ferry tickets and offers to Rethymno

Search all the ferry itineraries and cheap tickets for Rethymno in Aktoploika.gr. Online boat tickets at the best prices, search for the special offers, for the Piraeus – Rethymno journey and other itineraries and win from the specially discounted prices. In our site you will find all the ferries for Rethymno as well as the speed ferries. Cheap ferry tickets to Rethymno, Crete.