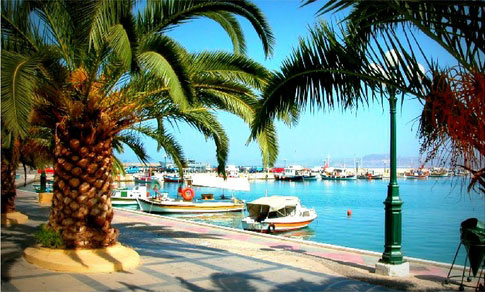 The beautiful landscape, the monuments, the great beaches, the good food and the hospitable locals of Sitia make it an ideal holiday destination in Crete. Sitia, which is a town in the Lasithi prefecture, has a developed touristic infrastructure and offers its visitors modern comforts for their holidays. Moreover, the fact that has an airport with direct flights from the Athens airport makes it even more popular. In Sitia visitors can admire beautiful archaeological and historic places from different historic eras and visit the museums, the monasteries and the churches. Additionally Sitia has got a huge sand beach with crystal clear waters, where you can try numerous water sports, relax under the warm sun and enjoy swimming. Two more beautiful beaches in Sitia are Hionia and Platani, which are not as cosmopolitan as the beach of Sitia is, yet they are equally beautiful with crystal waters. Sitia, although has a developed touristic structure, is a bit different than the rest of the tourist resorts in Crete. The rhythms are more relaxed and nights go by carefree with various cultural activities as well as fun and entertainment. Sitia is waiting for you and all you have to do is book your ferry tickets now.

There are regular and very frequent ferry itineraries from the port of Piraeus for Sitia. Book your ferry tickets online via aktoploika.gr and travel to Crete comfortably and without a care. The journey from Piraeus to Sitia lasts about 10 hours. The area around the port of Sitia is very beautiful and has got lots of taverns, restaurants and cafes.

Connection with other ports

You can now book ferry tickets online for Sitia via Aktoploika.gr. If you plan to travel during July and August, it's best if you have booked several days or weeks earlier to avoid hitches. You should also know that round-trip/return ferry tickets come with a considerable discount.

Transportation
There are bus stops at the airport, the port and the town of Sitia for the nearby beaches as well as for the rest of the prefectures in Crete. The bus itineraries in Sitia, just like in the rest of the prefectures and villages of Crete, are frequent and regular. Moreover, there are several taxis in Sitia that will take you where you wish to go. You can also rent a vehicle from the car and motorbike rental agencies available. Your traveling around the island will certainly be easier and more pleasant if you rent a vehicle.

Moving in Sitia City, as well as outside it, can be very easy, if you use the local or interurban buses There is also a special route, that connects the city's Port and the Airport. The Interurban Bus Station is located in Kokefalou St., in front of the Sitia Archaeological Museum, about 700 m. away from the Port. During summer, and due to the increased number of visitors, routes are more often, while new ones are added, taking passengers to the city's most popular beaches.

The bay of Merabello, the mythical Vai, the sunny Ierapetra, the goddess Athena bathed in the Lake Vulismeni. Pentozali (a traditional dance) in Saint Nikolaos, the award-winning olive oil traveling around the world, the windmills on the plateau of Lasithi. How much beauty can fit in one prefecture? How much beauty can a traveler endure? In Lassithi the resistances must be strong. Lets begin!

The easternmost prefecture of the island is the less mountainous, if we could say something like that about a region of Crete! It is unique with its population scattered more evenly in four cities-centres -half urban not gathered in a single capital city surrounded by villages. Not at all coincidentally, the archaeological sites are not far from the villages that succeeded them, but next to them, as well, despite the multiple variations of the story, the human presence has been continuous and undisturbed.

The bay of Merabello penetrates deep into the body of the island, leaving only 12 km. of earth to divide the Aegean from the Libyan Sea. The Lassithi plateau, the largest of Crete, prevails on the prefecture, which is dominated by Dikti, Thripti and Sitiaka mountains. The expanded beaches of the prefecture to the North, East and South, form a fascinating landscape. In Selakano, near the village Christos, there is one of the last native pine forests. There are maples and cypresses. Apart from the rare beauty, the locals also call it Melissokipo, because of the many bees that have been erected there. The area is excellent for observing wild birds.

Kazarma of sitia and the surrounding city. Kazarma, that is the Venetian Word for barracks, there is also in Tzermiado and is a small fort. In Kritsa, a traditional picturesque village, is where Jules Dassin filmed the movie 'Christ recrucified'. Of course, the village has changed since 1957, but very little comparing to the rest of Greece. The medieval village Voila, near the village Chandras, is tightly structured, with arched arcades, cobbled streets, an impressive tower and the church of St. George, where lies the tomb of the ancestors of Dionissios Solomos.

The venetian villa Ntemetzo, near Armeni, and the traditional settlement of Etia. The abandoned settlement of Spinalonga, which was first built by the Venetians, and was taken by the Ottomans, is impressive.

Kales, the castle of Ierapetra, built by the Venetians in the early 13th century. It was a simple rectangular fortress with a large yard. The Turks, when occupied it, they made several additions, adapting it to their own needs. The mosque in the old town of Ierapetra and in front of the old Ottoman faucet, for the ritual cleansing of the believers.

In Ierapetra survives the house of Peruli, a small rectangular two-storey house of the 17th century,where as it is said was hosted Napoleon Bonaparte when descended to Egypt. In Piskokefalo are saved the house of Kornaros, but also the Church of St. George with the family crest, while in the village of Trabzon, where the great poet Venetokritikos Vitsentzos Kornaros was born in 1553 , has been saved only the Church of the Virgin.

The lighthouse of Aforesmenos, on the northwestern edge of the bay of Merabello, which sees in the Carpathian sea, is built in a spooky and secluded landscape. According to the legend, owes its name to Caiaphas, who was buried here, when after the crucifixion he died aboard on his way to Rome.

Lasithi  "musts"
Organize a few days-accommodation or a visit at least to Aspros Potamos village. It's only one kilometer away from Makris Gialos and it's a village more than 300 years old. There is small hostel for your accommodation, that use alternative energy sources without being deprived of the basic comforts.

Ano Zakros village is located on the islands southeastern edge. It's where the European E4 Path ends, with one of the most important Minoan palaces in Crete and a tremendous experience waiting for you in The Canyon of the Dead. Locals are hospitable and you'll surely find yourself enjoying appetizers and "raki" in someone's place.

Vai Coconut Grove beach is just unique and you'll definitely feel being on a Pacific Ocean island. If you can't be there early in the morning, please be patient during the course. This place has a great fame and visitors are innumerable every day.

Devote a day for a cruise in Chrysi (Gaidouronisi). It's an exotic small island south of Crete, with a virgin beauty and – literally speaking- a golden sand. This place has been announced as part of the Crete Natura Net and protection laws are too strict. Don't leave garbage behind you.

Happy holidays! Crete is waiting for you!

Ferry tickets and offers to Sitia