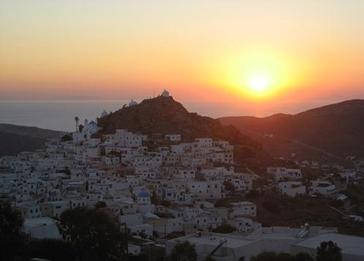 The island of Ios is famous for its amazing beaches with the golden sand and the crystal clear waters. Some of the most famous beaches of the island are the Milopota beach, the Kalamos beach, the Psathi bay and the Koumbara beach. Apart from its beaches, there's also intense nightlife and this is the reason why there are lots of tourists in the summer. The bars and the clubs on the island play music for every taste and when the fun begins there's no ending. The landscape of the island is breathtaking; the white-painted churches at various areas of the island are interesting while the picturesque streets and the traditional settlements will excite you. The countless churches, the Byzantine castle ruins, the Modern Art Museum, the Folk Museum as well as the Archaeological Museum are definitely worth a visit. If you too want to spend unforgettable holidays in Ios, all you have to do is book now your ferry tickets.

You can easily take a ship from Piraeus and the surrounding islands to Ios. You can also book your ferry tickets online via aktoploika.gr for a more comfortable and carefree journey. The journey from Piraeus to Ios lasts 7 hours by ferry and 3 hours and 30 minutes by speedboat. Ormos, the island's port, is a small touristic settlement that comes alive in summers with rooms to let, cafes, bars and clubs.

You can now book ferry tickets online for Ios via Aktoploika.gr. If you plan to travel during July and August, it's best if you have booked several days or weeks earlier to avoid hitches. You should also know that round-trip/return ferry tickets come with a considerable discount.

Transportation
The public transportation in Ios is excellent. The buses depart from central points for the villages and the beaches of the island every few minutes the whole day. There are also a few taxis in case you want to travel faster and more comfortable than with the bus. You will also find some small boats that will take you to more secluded and quiet beaches and you will be able to admire the landscape on the way. There are car and motorbike rental agencies as well. However, make sure you have booked the vehicle you desire before you arrive on the island.

Ios is an island famous for its polymorphism, its nightlife and its daily routine, so your transportation clearly depends on what kind of vacation you want. There is a local buses network, with a frequent routes network, about every 15-30 minutes during summer, that connects Hora with Ormos and Mylopota. Tickets can be bought inside the bus, while traveling with it will remind you your college years, with songs, jokes and a funny attitude. During summer many daily trips are organized, most of them by local tourist offices, a popular way to have a complete tour in the island. Finally, a more adventurous way to move, is rent a boat from Ormos, that will take you to the most isolated beaches and make you feel like Robinson Crusoe for a while.

The island for all ages

Atmospheric, beautiful, blue ... Ios, stands out for its beaches, its paths, its settlements, but also its separate corners from where you can enjoy the excellent views of the Aegean Sea and the neighbouring islands. Ios is an island with vibrant life, attracts people of all ages as it has managed to combine services targeted at different ages.

Higher than the port, at a distance of 2 km. lies the town of Ios. Scenic and white is built amphitheatrically on the hill, where strikes the island's beautiful lady! Virgin Gkremiotissa. The view from there is panoramic.

The whole village poured in front of  her feet. To the right there is the port, to the left left the windmills, and towards the neighbouring islands Sikinos and Santorini.

The highest mountains of Ios are Pirgos (713 m) in the centre of Ios, Prophet Elias (514 m) in the West of the country and Vouni (409 m) in the northern part of the island.  The mountains of Ios offer both climbing and mountain hiking, while from their tops you can enjoy the panorama of the island and the magnificent sight of the Aegean Sea with all the surrounding islands of the Cyclades.

Ios, due to the morphology of its territory, the beauty of the natural environment and the successive landscapes that come unfold before the eyes of the visitor, is the ideal place to explore, either by car or even better by choosing one of the many beautiful trails.

Ios has a traditional cycladic gastronomy, which is based on olive oil, legumes, fish, cereals and vegetables.  As characteristic dishes we could consider the chickpea balls, tsimetia (kind of dolma where instead of leavres, they use pumpkins) and dried whitebait, which are dried in the sun and then they are baked on the coals. The visitor should also taste the meats of Ios (fresh lamb, pork and beef) which are delicious and totally safe and healthy.  We should not omit the reference to the island caper, this aromatic fruit gives a special taste to salads and cooked food.

As in many Aegean's islands, there are places, where your cellphone will be useless for communication, because there is no sign, especially on Hora's alleys.

Nights in Hora demand a light jacket, as the wind (especially during August) is something common here.

Be very careful when you drive. The island's roads are too narrow and there are many turns and cliffs.

Ios' most beaches are not easy to be reached. You'll have to move by small boats or walk (sometimes for a long time) on tough paths.

If you are a group of women you'll be able to enter almost every club on the island for free. Club owners are more positive to female-visitors. There will be definitely many treats for you, but don't overdo it when drinking.

The island's nightlife gets off limits many times, so if you have kids choose more quiet places for your drink and avoid the famous clubs and beach bars.

Watch you personal belongings, when you are on a beach or in crowded night-clubs.

Ferry tickets and offers to Ios

Search all the ferry itineraries and cheap tickets for Ios in Aktoploika.gr. Online boat tickets at the best prices, search for the special offers, for the Piraeus – Ios journey and other itineraries and win from the specially discounted prices. In our site you will find all the ferries for Ios as well as the speed ferries. Cheap ferry tickets to Ios.