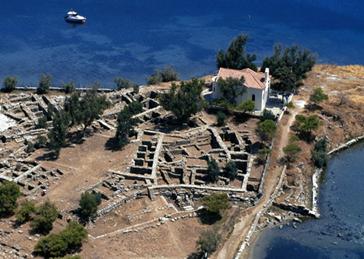 The beautiful Cycladic island of Kea (Tzia) with its traditional settlements, the tiled alleys, the archaeological treasures and the amazing beaches is waiting to offer you dreamy holidays. This Cycladic island stands out from the rest of the Cycladic islands because several of its areas are full of beautiful trees and rare plant species. Its beaches match its landscape beauty. Spathi, Psathi, Orkos, Gialiskari, the Three Beaches, are just a few of the beaches that you must visit in Kea. If you like diving, then the magical seabed of Kea will enchant you. Additionally, the Medieval Castle, the Pithios Apollo Temple, the Lion monument as well as various monasteries and churches are some of the places you should visit in Kea. Wander around the island and enjoy the sea, the beautiful landscapes and the amazing sunsets. Taste the dishes in Kea, especially the local paspala dish. Kea is definitely a calm island for relaxed and carefree holidays. If you too want to spend unforgettable holidays in Kea, all you have to do is book your ferry tickets.

You can easily and comfortably take the ferry from Lavrio and the surrounding islands to Kea. You can also book your ferry tickets online via aktoploika.gr and then your journey will be even more comfortable and carefree. The journey from Lavrio to Kea, at the Korissia port, takes only 1 hour and 30 minutes. You will find a lot of places to stay as well as restaurants, taverns and cafes near the harbor.

You can now book ferry tickets online for Kea via Aktoploika.gr. If you plan to travel during July and August, it's best if you have booked several days or weeks earlier to avoid hitches. You should also know that round-trip/return ferry tickets come with a considerable discount.

Transportation
You holidays in Kea will surely be very comfortable since there are a lot of bus itineraries with frequent departures for all the places and beaches on the island. In addition, you can use the taxis available on the island. Naturally, Kea has motorbike and car rental agencies, although it is advisable to book the motorbike or car of your choice before your arrival on the island.

During summer, Kea transforms into a various visitors mosaic, and as a result of that, transportation needs are increased, so moving with the local buses is the most popular option. The bus station is located by the port, the road network is fully covered by various routes. The island's natural terrain offers many options for sorties in nature, all of them impossible to fulfilled by any kind of vehicle. An ideal proposal is the island's donkeys, that can be rent, which will help you on your way to folklore paths. There are also sea-cubs, that will take you to specific beaches, all of them inaccessible from the beach.

KEA or else Tzia. Destination for every taste. Ready for everything. It's one of the largest islands of the Cyclades and the closest to Athens. Chora, built amphitheatrically, is the capital of the island, built in the same location as the ancient city of Iulida.

At the southern end of Aspri Vigla, there are the most important buildings, the Temple of Athena to the north, and the Temple of Apollo to the South. In the Valley of Vathipotamos, was discovered the theater and a part of the city's water supply system. In the Archaeological Museum, are exposed parts of the pediments of the Temple of Athena. In the bay of Otzia, with rare natural beauty, there is the biggest beach of the island, full of dense trees which are offering shade. The azure waters are transparent and are ideal for swimming.

Island that doesn't reveal directly and easily the wealth of flora. Forests of majestic oaks, cover large areas of the 'interior' of the island, or with the gorgeous sea lily, which still adorns its beaches.

On the island, except for the fresh fish it is worthwile to taste specialities such as 'Loza', salted pork, 'sausages', 'paspalas' pieces of pork cooked with eggs and tomatoes, 'tsigara', pork with fat, 'tigania', pork with wine, «tsigaropita», but also rooster with potatoes or salad antrachla. The above appetizers come perfectly with the local wine 'black' or 'mavroudi', while for an impressive finale look for ' Sesame' , 'sweet quince», «mpezedes», but also «neromeli», a kind of cream with water, honey, flour and almonds or walnuts, which is served with cinnamon and sesame..

Some suggestions on what you should not miss during your visit to the island.

The Lion of Tzia, Liondas for the locals, sculpted on a rock over the capital, Iulida, during the ancient years and connected to many legends and traditions of the island.

The restored stone mills in Kunduros, that are inhabited

The neoclassic buildings of the School at the entrance of Iulida and the ones of the Town Hall in the central square.

The paintings by Alekos Fassianos in one of the shelters in the central square of the capital.

The Acropolis of ancient Iulida with the traces of the Temple of Apollo, where the remains of the Medieval Castle from the 13th century, which was built by Dominic Mikeli.

The isolated monastery of Virgin Kastriani, in Otzia, built on a steep cliff, with gorgeous views.

The ancient Karthea or Poles, with the foundations of Temples of Mount Olympos and remaining walls of the theatre and the aqueduct.

On weekends the island is full of visitors from Athens and those who have villas there. You'd rather choose isolated beaches or explore the mainland's villages.

The island's roads are similar to most Greek islands': they are narrow, they have many turns and long parts of dirt-roads. There are also many animals, that will show up out of nowhere, so you better avoid high speeds.

Avoid the island's north beaches, when the wind is strong. The seaway is so strong, that it will be impossible to swim, you'll loose half of your day, as well as your energy.

Ferry tickets and offers to Kea

Search all the ferry itineraries and cheap tickets for Kea in Aktoploika.gr. Online boat tickets at the best prices, search for the special offers, for the Lavrio – Kea journey and other itineraries and win from the specially discounted prices. In our site you will find all the ferries for Kea as well as the speed ferries. Cheap ferry tickets to Kea.