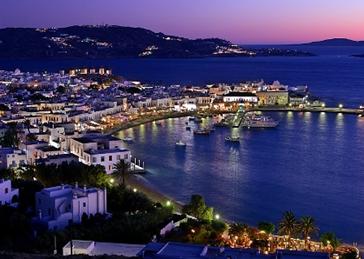 Mykonos is the most famous Greek island around the world. The cosmopolitan air of Mykonos, the celebrities that visit it, the frantic nightlife as well as its beaches have made the island especially loved among Greeks and foreigners but also an endearing destination for holidays almost around the year. During summer, the cosmopolitan beaches of the island, such as Paradise and Super Paradise, are totally full of people and frantic dances take place during the day. There are also other beautiful and perhaps quieter beaches on the island, such as Mersini, Megali Ammos and Korfos. The beaches of Mykonos are countless and you will need several days to visit them all. The narrow alleys of Hora with the numerous stores, restaurants, bars and clubs, are always full of people and the friendly and hospitable locals are ready to assist you and offer you everything you need on your holidays. The white-painted traditional little houses of Mykonos match perfectly with the modern tourist infrastructure of the island and together offer a unique place for holidays, rest and entertainment. You will surely get the best hospitality possible in the hotels and rooms to rent in Mykonos. You can also visit Little Venice, where you can admire the beauty of the landscape as well as the magnificent, colored buildings. There are also a lot of churches and chapels on the island, which you can visit and admire the architecture and the unique icons. The islets Rinia and Dilos belong to Mykonos. Dilos, which was considered a holy island in the ancient times, is uninhabited but there are rich historic treasures at the Archaeological Area and the Archaeological Museum of Dilos, where there are important exhibits. There are daily departures of boats from Mykonos for Dilos and the journey lasts only 20 minutes. The Mykonos airport, with direct flights from and to the International Airport of Athens, makes the island an even more desirable destination. If you too want to spend unforgettable holidays in Mykonos all you have to do is book your ferry tickets now.

You can easily and comfortably travel from Piraeus, Rafina and the surrounding islands to Mykonos. You can also book your ferry tickets online via aktoploika.gr for a more comfortable and carefree journey. The journey from Piraeus to Mykonos lasts 5 hours on a conventional ferry while it lasts about 3 hours on a speedboat. The new port of Mykonos is just 10 minutes away from Hora on foot. Outside the port there is also a bus stop in case you do not want to walk to Hora.

You can now book ferry tickets online for Mykonos via Aktoploika.gr. If you plan to travel during July and August, it's best if you have booked several days or weeks earlier to avoid hitches. You should also know that round-trip/return ferry tickets come with a considerable discount.

Transportation
Buses are an easy way of traveling around the island and visiting the beaches. The itineraries are quite frequent during the summer. You can also take a taxi, although is much more expensive than the bus but it's definitely very comfortable and fast. You will find most taxis at the central square in Hora. Make sure you have agreed on the final amount you'll have to pay before getting in one of the taxis in Mykonos. There are also several car and motorbike rental agencies in Mykonos so by renting your own vehicle you will be able to explore the island as you wish. Having your own vehicle is handy especially at night when there are no buses and at the same time you will be able to explore the more distant areas of the island. An island like Mykonos attracts lots of people even after summer so you should book the vehicle of your choice before your arrival on the island. There are daily boat departures from Platis Gialos and Ornos for the various beaches of the island. There are also small boats with regular itineraries for the island of Dilos.

Even though not the most popular way of transportation, Mykonos' local buses' network is a reliable and cheap option to move in the island, especially during summer, where thousands of visitors make transportation with car or scooter an exhausting process. With tickets costing very low (1.40-1.90 euros) and maximum arrival time no more than thirty minutes, local buses sufficiently cover the visitors' needs from and to the island's most popular destinations: Platis Gialos, Psarrou, Orno, Paragka, Paradise, etc. You should still be a little patient, while Mykonos' rhythm is too intensive, causing smaller or bigger traffic in the streets.

Mykonos Guide
Mikonos is a beautiful island. It is not only ... cosmopolitan but manages to seduce even the most demanding visitor. Wherever you go, despite the intense tourist development, you can enjoy a unique natural environment, its gorgeous shores, its impressive cliffs, the old farmhouses and the numerous chapels of its hinterland, the proud windmills and small pigeonholes. All this combined with the transparent and refreshing summer atmosphere, and its colors. The earthy color, the grey, the white and blue in all its shades, justify why Mikonos,  early on, became the favorite place, not only for artists-painters and photographers in particular-but for any kind of celebrities in General.

Total white houses built in cubic shape, countless labyrinthine alleys with whitewashed cobbled, you meet in Chora but also and in several other settlements. An island with its roads and its famous notorious markets, the public buildings and shrines, the  luxurious houses and shops, the cisterns, the columns, the mosaics, the ancient wells everywhere around preserved and well tended. The beaches of Mikonos are breathtaking, covered with white or golden sand and crystal clear blue waters, they gain the impressions and stay forever etched in the mind of the visitor.

If we can say that a product has been identified by the island, it cannot be other than the famous 'kopanisti' of Mikonos. "Kopanisti' is a soft cheese with a strong peppery taste which is used as the basis of the «t'robolia», also soft cheese,fermented for at least 25 days. A wonderful tidbit for ouzo, which is very used in Mykonos, is 'mostra with 'kopanisti'. Mostra is the mikonian bread, wet with water or a little olive oil and smeared with 'kopanisti', over which there is tomato juice. Another well known cheese of Mykonos is 'ksinotiri'

From October until Christmas, every year, 'chirosfagia' take place in Mykonos. The main preparations of pork is the 'lard', the 'sausage' baked in salt and sun and you can eat it fried or like salami, if you let it dry longer and of course the 'luza' the crown of all, which is sun-baked pork tenderloin with savory, oregano and salt and goes eaten cut into very thin slices.

Mykonos isn't the perfect place to relax, meditate or have a quiet vacation. Life here runs and is intense, but unfortunately there are many , who don't come for vacation. Be careful with your wallet and your personal belongings.

Driving here is a notable experience, especially during noon and afternoon, if you are used to drive in a 5-10 km per hour speed. Be patient and watch for careless "night-owls". The police's check points and alcohol-tests are many, so don't risk to drive, if you are drunk.

In most "cool" night clubs you'll face endless lines and face control, which means you may waste 2-3 hours of your life, just to learn that the place is "full".

There many cafes and beach bars with the "reserved" sign on their central tables. In others you won't be able to choose where to sit and your table will b chosen by the cafe's PR. OK, you're definitely in Mykonos, the island of edges and contrasts.

The island's latest trend are wanderers, that sell stolen or fake products. Buy at your own risk, having in mind that you just have a good time and you're not investing your money on a famous brand name.

Ferry tickets and offers to Mykonos

Search all the ferry itineraries and cheap tickets for Mykonos in Aktoploika.gr. Online boat tickets at the best prices, search for the special offers, for the Piraeus – Mykonos journey and other itineraries and win from the specially discounted prices. In our site you will find all the ferries for Mykonos as well as the speed ferries. Cheap ferry tickets to Mykonos.