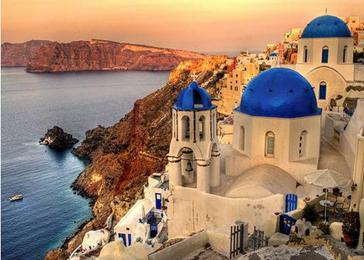 Santorini is considered, and actually is, one of the most beautiful islands in Cyclades. It is particularly loved by foreigners and Greeks and especially in the summer, it is full of visitors who want to enjoy the sun, its beaches and its wonderful sunsets. There is, of course, a modern touristic infrastructure with modern and comfortable hotels, rooms to rent, restaurants, bars, modern ports and the airport with direct flights from Athens, which make the island an even more attractive destination for holidays. If you are interested in nightlife then Santorini is exactly what you are looking for in your holidays. Santorini wakes up at nights and apart from the restaurants and the taverns that stay open until very late at night you will also find numerous bars and clubs to party until early in the morning. Moreover, while at night you can have fun in the clubs, in the morning you can enjoy swimming and water sports at the island's amazing beaches, Perissa, Perivolo, Monolitho and Kamari. Several of the beaches in Santorini have particularly colored sand and some others have imposing rocks around them. During your holidays, visit the ancient settlement of Akrotirio and ancient Thira. Additionally, walk in the traditional alleys of Fira, Santorini's capital, and discover the unique beauties of the land. It is also worth visiting the volcano, the Archaeological and Folk Museum of the island, the windmills, Kaldera, the castle of Oia, the monasteries and chapels of the island. If you too want to spend unforgettable holidays in Santorini all you have to do is book your ferry tickets now.

You can easily and comfortably travel by ferry from Piraeus, Rafina and the surrounding islands to Santorini. You can also book your ferry tickets online via aktoploika.gr for a journey more comfortable and carefree. The journey from Piraeus to Santorini lasts about 9 hours by ferry and about 4-5 hours by speed ferry. There is also a ferry departing from Rafina for Santorini and the journey lasts about 8 hours. Both ports of Santorini, the port of Thira and the port of Athiniou have got several ferry itineraries. The port of Athiniou, of course, which is the newest and is 12 kilometers away from Fira, is the busiest one in departures and arrivals. Outside the port you will find one or two cafes, some mini markets and the bus stop.

You can now book ferry tickets online for Santorini via Aktoploika.gr. If you plan to travel during July and August, it's best if you have booked several days or weeks earlier to avoid hitches. You should also know that round-trip/return ferry tickets come with a considerable discount.

Transportation
The bus itineraries in Santorini are exceptional, always on time and there are bus stops at almost all the beaches and the settlements of the island. During summer the itineraries are even more frequent and you will surely not regret it if you choose the bus for your travelling. The taxis are more expensive than the buses but travelling is faster and comfortable. You find several ones available outside the ports and the airport of the island as well as in the capital. One more ideal way of explore the whole island of Santorini is to rent a vehicle from the various car and motorbike rental agencies. You should book the vehicle of your choice online in order to have it waiting for you on your arrival on the full of tourists island, especially in the summer, so that you will not find it difficult to find one at the last minute.

There are some places in Santorini, that moving with a vehicle is totally impossible, or, even, forbidden (Fira, Oia), as well as places, where you'll have to use anything else but your feet to move to (Northern and Eastern parts). The Municipality of Santorini, to reduce traffic during "red season", established a well-organized and functional and cheap bus network, where local buses, through plenty of routes, daily connect every settlement and spot in the island. Ticket prices are too low, no more than 3 euros for the most distant place. Starting point is in Fira Central Square, where you can find a detailed timetable.

Famous ... by birth!
The archetypal image of the Cyclades, the famous throughout the world Santorini, will carry you away, with its unique, eerie beauty. With the volcanic Caldera dominating in the landscape, the traditional cave houses that become one with the rock, the breathtaking views and the stunning beaches, White, Black and Red, Santorini leaves no visitor unmoved.

The physiognomy of Santorini is determined by the volcanic activity. Santorini is, after the Vesuvius, one of the most and best studied volcanoes, because very rarely the interior and the construction of a composite volcano is so clean. Today, seven craters are located on the island of Nea Kameni and the island of Palea Kameni. Another undersea crater, called Columbo, is located in sea area northwest of the island, close to Oia.

The territory of the island is blended with silica sand and pieces of pumice theran. It holds a lot of moisture, thanks to the porous pumice, in order to be favored the arid crops despite the few rainfalls.

Akrotiri is one of the most important prehistoric settlements in the Aegean, with the first signs of inhabitation dating back to the Late Neolithic age, around 4000 BC, during the Middle and Late Bronze age, 20th-17th century BC, the settlement was expanded and gradually developed into one of the main urban centers and ports in Aegean Sea. Its wide extent, the developed sewerage system, the sophisticated buildings with the exquisite murals, the furniture and the vases, testify the great degree of development and the prosperity of the region. As evidenced by the import objects that have been found, Akrotiri was maintaining contacts with the island, but also with the  mainland Greece, the Dodecanese, Cyprus, Syria and Egypt. The settlement was evacuated by its inhabitants during the last quarter of the 17th century BC, because of seismic vibrations that preceded the large volcanic eruption. The volcanic materials covered the settlement, keeping it  in the situation that we see today.

Ancient Thira. The historic town of the island lies in Mesa Vuno, at an altitude of 369 metres. It was founded in the 9th century BC by Dorian colonists and continued to be inhabited until the early Byzantine period. Most of the monuments that have survived today belong to the Hellenistic and Roman periods of the city. The most important of these are: the sanctuary of Artemis, the market, the Royal Arcade, the Temple of Dionissos, the sanctuary of Apollo Karnios, the gymnasium, the Cemeteries and the Theatre..

Caldera, Nea and Palia Kameni, Thirasia. The tour of the Caldera and its smaller islands by boat is a unique experience. Get off at the small port of Nea Kameni and walk up to the crater of the volcano, in a route of about 30 minutes inside a mysterious landscape. Swim in the thermal waters of the hot springs, where sulfur springs, on the back of Palia Kameni.

The famous and much photographed sunset is breathtaking, from any point of the caldera you watch it. Popular spots are the Prophet Elias in Imerovigli and Oia.

Ia is the first settlement in Greece that was declared a conservation area and is built at the northernmost point of the island and the entire settlement is sculptured in reddish rock. Wander around the narrow streets and admire the unique architecture. Emporios, built on the foot of Mount Prophet Elias, is a medieval settlement built with volcanic stone. Admire the plasticity of the shapes that lends the volcanic material, the fortification architecture of their isolated windmills which arrive in style the 6 meters.

If you visit Santorini on July or August avoid to trouble yourself crammed along with hundreds of visitors, to watch Oia's sunset. You'll get tired and the applause and yelling, when the sun is setting, will kick out your romantic mood. Santorini has just as beautiful places to enjoy the sunset's colors: the Old Mines in Fira, Panagia Matrona in Baksedes, Faros in Ai Giannis (in Oia).

Don't get carried away and spend a fortune for a dinner, that may be proved much less than expected. Prefer taverns away from...publicity and crowds.

Buying domestic wines from a winery is preferable than from a shop. Prices are lower and you'll be sure you've bought an authentic wine produced in Santorini.

Don't rent a donkey to cross a stair, a slope, etc. These animals spend half of the day carrying people, without food nor water, under the sun. It's an inhuman old habit and there are concerted efforts from entities and volunteer animal-rescue companies, to be repealed as a job. Please help this effort by not paying for a course that will torture a poor animal.

Ferry tickets and offers to Santorini