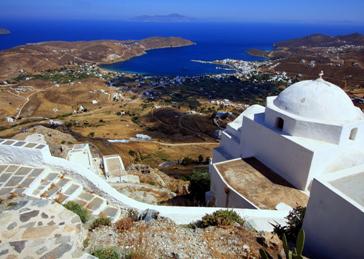 The Cycladic island of Serifos is a combination of beautiful landscapes, traditional villages, crystal waters and exceptional hospitality. This touristic island which has preserved its character and its picturesque character offers calm and relaxed holidays to its visitors. The golden sand beaches of Serifos and its beaches, hidden behind tall rocks, will surely impress you. Serifos has certainly lots of beautiful landscapes and places worth visiting. The island's Hora, which is built high on a rock, stands proud through the years with its traditional white little houses and its picturesque, narrow alleys. One of the most famous beaches of the island is Psili Ammos from where you do not want to leave even when it's dark. Serifos certainly possesses some other beautiful beaches as well, like Platis Gialos, Agios Sostis, Sykamia, Koutalas and Livadakia. Although you will be tired by the time you reach the Castle, the view will be most rewarding. It is also worth visiting some of the caves with their stalactites and stalagmites and the Folk Museum of Serifos, of course. Although nightlife on the island is not frantic, you can enjoy the cuisine of the island at some seaside taverns and have a drink at one of the bars. Book your ferry tickets now!

You can easily travel by ferry from Piraeus and the surrounding islands to Serifos. You can also book your ferry tickets online via aktoploika.gr for a journey even more comfortable and carefree. The journey from Piraeus to Serifos lasts about 5 hours by ferry and about 2 hours by speed ferry. Livadi, the port of Serifos, is 5 kilometers away from Hora and it is a very touristic place. In Livadi, very close to the port, you will find lots of restaurants, taverns, cafes, several rooms to rent and stores with touristic items and souvenirs.

You can now book ferry tickets online for Serifos via Aktoploika.gr. If you plan to travel during July and August, it's best if you have booked several days or weeks earlier to avoid hitches. You should also know that round-trip/return ferry tickets come with a considerable discount.

Transportation
Transportation from Livadi to Hora, Psili Ammos and Megalo Livadi is not frequent enough and you may need to wait some time in order to be transported. However, there are some taxis on the island that will take you fast and comfortably to your destination. In order to explore the island, which is relatively big so you cannot visit all the beaches on foot, you can rent a vehicle to move around comfortably and freely. You should, however, book the vehicle before your arrival on the island as, especially during summer, you may find it difficult to rent a car or a motorbike due to the increased number of tourists.

You can move around Serifos island in two ways, by bicycle or by taking one of the local buses, that connect the two main settlements, Livadi and Hora, as well as those between them. That's because Serifos' roads are too narrow and you'll face difficulties to park your car, so local buses will untie your hands. Routes are not frequent, however you'll save time and you'll keep your nerves low, instead of vainly searching for a parking for your car. You can buy your ticket inside the bus, from the bus driver or the collector.

The Active magnetic field in combination with the cycladic environment create the ideal suggestion for relaxing holidays in the Cyclades. Here in serifos, the 'metallic' rocks of the island, give another dimension to your vacation! Leeward beaches in the hug of steep rocks, almost all with thick natural shade from tamarisks on the wave, with crystal blue waters and golden beaches and white-washed villages are some of the features that will make your holiday unforgettable. The whole island is a balcony to the Aegean sea, with view to the north  Kythnos, Siros to the northeast, Paros to the east, Sifnos to the southeast and Milos to the south. At various points of the island, you will find beautiful terraces, built since many years in order to be given the possibility to create small farmlands.

The best dish of the gastronomy of Serifos, is ''revithada'' which is cooked in a very special way and is considered as the 'santa claus' dish of Serifians. The chickpeas are boiling all night in the oven, along with raisins from the variety ' platiracho ', laurel and mainly with the back part of the tenderloin of the pig, not excluding the tail! Dish of unique flavour and originality. From the pork are made the 'luzes' and the 'sausages', 'tsigarides' (pork cooked with potatoes), as well as 'siglina'. Taste split peas in a feast, skepastaria, fennel balls and sun-dried octopus, 'turlu' (potato pumpkin with meat), but also delicious local cheeses: the serfian, the sour cheese of charani, the sour cheese, the peppery and the Laina's cheese..

Monastery castle of the Seneschals

The monastery built in 1572 with fortress construction with tall precincts, battlements, small openings in the walls and the only entrance (low loggia) at a height of 4 meters, without a permanent ladder, to guard the icon of Seneschals that had to be saved from Cyprus, dominates the northeastern part of the island. It aquired a great wealth and fame that, causing the pirate attacks, has forced the monks to be warriors too.  The temple of great architectural interest, three recess, domed singled, wonderful iconostasis and old murals, hosts in the center of its floor, a marble stone with the double-headed eagle dating from 1659.

In almost every beach you will have to carry anything you need, as none of them are organized. You'll definitely need a sea-umbrella, as shades are very few.

Many paths are tough to be crossed and most of the dirt-roads need to be patient and careful when driving. Some days there is a very strong wing blowing in the island, so you better ask a local about the condition of the beach you're about to go to.

Ferry tickets and offers to Serifos

Search all the ferry itineraries and cheap tickets for Serifos in Aktoploika.gr. Online boat tickets at the best prices, search for the special offers, for the Piraeus – Serifos journey and other itineraries and win from the specially discounted prices. In our site you will find all the ferries for Serifos as well as the speed ferries. Cheap ferry tickets to Serifos.