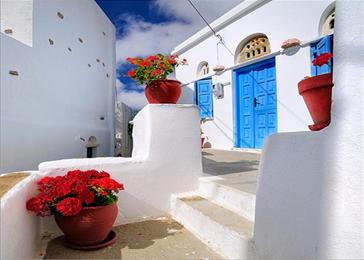 Tinos is a Cycladic island full of natural beauties, amazing beaches, manors and traditional houses. Some of its villages seem to come from the old days, untouched by time. Nevertheless, Tinos is a modern island, with developed touristic infrastructure, which welcomes visitors all around the year, mostly pilgrims who visit the Holy Temple of Panagia Megalohari. In Hora as well as in the rest of Tinos, you will find numerous chapels and monasteries since the island is a holy destination. Tinos, apart from pilgrims, also attracts tourists who visit it for its beautiful landscape and amazing beaches. Almost all the beaches in Tinos are organized and offer numerous water sports and various other athletic activities. The nightlife on the island is not that frantic but you will find several restaurants, taverns and bars that stay open until late at night in Hora. The local cuisine of the island is extremely good and you should definitely try froutalia, an omelet stuffed with cold meat and cheese. There are also several stores on the island for the ones interested in shopping. If you too want to spend unforgettable holidays in Tinos all you have to do is book your ferry tickets now.

You can easily and comfortably travel by ferry from Piraeus, Rafina and the surrounding islands to Tinos. You can also book your boat tickets online via aktoploika.gr for a journey more comfortable and carefree. The journey from Piraeus to Tinos lasts about 5 hours by ferry and about 3 hours and 30 minutes by speed ferry. The journey from Rafina lasts about 4 hours by ferry and about 2 hours by speed ferry. In the summer there is a ferry departing from Lavrio for Tinos as well and the journey lasts about 4 hours. There are actually two ports in Tinos, the new one and the old one. The new port of Tinos is in Pallada which is close enough to the center of Hora while the old one is exactly in the center of Hora. The regular and very frequent ferry itineraries make the port of Tinos one of the busiest ports of Greece. When you reach Tinos and get off the ship you will see the road leading to Panagia of Tinos.

You can now book ferry tickets online for Tinos via Aktoploika.gr. If you plan to travel during July and August, it's best if you have booked several days or weeks earlier to avoid hitches. You should also know that round-trip/return ferry tickets come with a considerable discount.

Transportation
The road network of Tinos is relatively developed and keeps getting improved. There are lots of buses connecting all the villages and the beaches of the island with Hora as the main terminal. During summer, there are frequent itineraries from early in the morning until late in the evening. In Hora you will also find radio taxis available until 1 o'clock in the morning that can take you anywhere on the island fast and comfortably, although the cost is pretty high. Due to the developed road network and the signposts, you can easily travel by renting a vehicle. You will find several car rental agencies on the island but because the island is a favorite holiday destination, you should book the vehicle of your choice online.

Tinos is a "high traffic island" during summer months and the visitors' increased transportation needs can properly be covered only by the local buses. Although there are only 10 buses available, routes are frequent, while there are some tourist offices, that offer a daily tour, a popular option for those, who wish to have a short look in the island. These tours usually take place in July and August. The bus station is located just beside the port. The days before and after the Assumption more private buses are added, increasing the routes' frequency.

It's one of the most important religious centers of our country, however the beauties of the island are so many that wouldn't deserve to be seen only in this way! The church of Megalochari attracts thousands of tourists every year from Greece and all over the world.

A tour on the island, is enough to begin to reveal the beauties of the island. In the central part, dominates the steep hill of Exomvurgo at a height of 641 m with the Ancient and Venetian town, and the ''plateau of the war'' seems to be the hide many secrets, which expect the traveler to discover them. The total length of the coastline is estimated at 114 km and the circumnavigation of its coasts in a short distance from the shore sailing, requires approximately 37 n. miles. Tsiknias, that is located to the East is the island's tallest mountain at a height of 726 m.

Vegetables, potatoes, dairy products, such as the famous Tinian little cheeses and the graviera cheese of finest quality, production of Tinos, are just some of the local products of Tinos. Also, the thyme honey of premium quality, and the famous ''rozaki'' grape. Taste the traditional recipes of the island, they will amaze you!

Fragrant 'amigdalota', the ''lichnarakia'' of particular shape, an Easter sweet with fresh cheese and strong orange flavour, crsipy 'fish' with almond fillings (sweet offered mostly in marriages with «xerotigana» and «sesame in lemonofilla») and crispy 'mezedes' with lots of lemon shavings.

From cheese products Tinos is famous for its ''stone'' cheeses, made from the cheese «petroma», for the ''round cheese'' (because of its shape), for  ''malathuni'' but also for ''kopanisti''. Also taste ''caper'', ''dried tomatoes with mush'', ''pickled samphire'', ''scalloped potatoes'', ''furtalies'', ''pickled artichokes or with scrambled eggs'', and ''agkinaroryzo'', ''livers in tomato sauce with pilaf'', ''kordomakarona'', ''marathos balls''. The next time you visit the 'holy' island, stay more than a few hours. You have so many flavors to taste …

Before you choose on which beaches to go, be informed about each one's course and facilities. You'll have to walk or climb to access some of them, while others are so isolated, that you'll definitely have to bring everything you'll need with you.

If you can avoid it, don't visit Tinos in the middle of August. That's when the island celebrates and there are dozens of thousands of visitors, a fact that will tire you to get there.

Ferry tickets and offers to Tinos