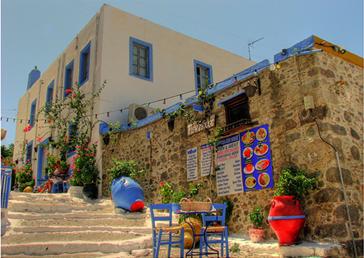 Kos is a very touristic island, with organized beaches, several hotels, restaurants, bars and clubs. The intense nightlife on the island and its natural landscape make it a favorite destination for holidays. However, the touristic development has not affected its ancient part and its history that goes thousands of years back, at all and combined they create an ultimate relationship. Kos has numerous visitors from all over the world and Greece especially in summer. The fact that it has its own airport makes access and departure of the visitors very easy. Kos is the island of Hippocrates, father of Medicine, and visitors should visit the ancient temple of Asclepius and the Plane Tree of Hippocrates to admire the greatness of the ancient years. It is also worth visiting the Ancient Market and the Castle of Nerantzia. The beaches of the island are special and different enough from each other. You will find several organized and cosmopolitan beaches like Tigaki and Lambi but also quieter and more secluded ones like Psilos Gremos and Polemi. There are more beaches with crystal clear waters as well such as Mastihari, Agios Fokas and Paradeisi. In Kos you will spend unforgettable holidays and you will enjoy every minute of it so wait no more, book your ferry tickets now.

There are regular ferry departures from the Piraeus port for the Kos port and the journey, including stops to other islands as well, takes about 10 to 15 hours. In fact, by booking online your ferry tickets via aktoploika.gr your journey will be more comfortable and carefree. The Kos port is also the capital of the island and has a developed tourist infrastructure, offering visitors everything for their rest and entertainment. Outside the port, you will immediately see the beautiful buildings and the squares of the capital.

You can now book ferry tickets online for Kos via Aktoploika.gr. If you plan to travel during July and August, it's best if you have booked several days or weeks earlier to avoid hitches. You should also know that round-trip/return ferry tickets come with a considerable discount.

Transportation in Kos
The road network in Kos is modern and there are buses departing from the capital of the island for all the rest of the areas and the organized beaches. You can use the city buses for your short distance travels. There are also several taxis on the island but the cost is surely higher compared to buses which cost considerably lower. However, the distances on the island are long enough and maybe you should consider renting a car, motorbike or even a bicycle. You will find a lot of bargains on vehicles in Kos and on the internet. Additionally, Kos has two trains with frequent schedules, which go around the city.

Kos is an island, that offers a good selection of transportation ways, but local buses are surely the easiest and cheaper one, connecting the island's capital with all settlements. The bus station is located downtown in Kos City, at Kleopatras St., and tickets are too cheap with the most expensive costing about 11 euros. The routes' frequency is increased during summer, as extra routes are added, moving visitors to the island's most popular beaches. An alternative way is to rent a bicycle, to join destinations close to you, or join one of the small, graphic fish-boats, on their small, daily cruises around the island and into specific beaches.

Come with a bicycle!

The third largest island of the Dodecanese and second in population after Rhodes, receives alternative tourists with bike lanes, the garden of Hippocrates, dilapidated castles, spas and plenty of ... thermal wine!

The whole Kos can be termed as 'Archaeological Park'. See Kos, the island's capital and port, where dominates the castle of Neratzia, with its bridge passing over the Avenue of inikon to be connected with the city, but also the square where stands the mosque of Lotzias and the Planetree of Hippocrates. The heart of the city beats in Freedom Square with its impressive municipal market, Ntefantar mosque and the archaeological museum. From the square, walk in the old Turkish district Chaluvazia and visit the Ancient Theatre, the Roman House, the Ancient Agora, the mosaic of Rapture of Europe and the Conservatory. And most importantly ... all these you can see it with a bike!

Walking along the coastal road, at the end of the Coast Kunturioti you will see the Plane tree square. This is the most famous square of the city, since there is the plane tree of Hippocrates. The huge tree, which age is more than 2,500 years, and it has a circumference of 12 meters, was planted, according to the tradition, by Hippocrates himself and under its shadow he taught his students of medical science.

The Asklipiion. It is located 4 km. from Kos and is one of the most important sanatoriums of antiquity. Among the ruins from the 4th and 3rd century BC, you will see the sanctuary of Asklepios, the altar of Apollo Kiparissiu.

Kos, a relatively flat island, is one of the few islands of the Dodecanese with abundant water. Scattered vineyards beautify the landscape, granaries, and vegetables, with the famous tomato that is used for making sweet preserves. To get a taste of Kos, taste first the wine cheese or kokkinotiri. Cheese from goat and cow milk, which, after being dried in the sun, immersed in a mixture of vinegar, wine, salt and pine peel to get its unique fragrance! Especially in the villages of the hinterland you discover pitaridia, handmade noodles cooked in meat broth, the barbarian, boiled wheat with tahini, sugar, almonds, walnuts, raisins, pomegranate and herbs, mizithra cheese, served with cottage cheese, wheat breads, fermented with grated cheese and herbs, or 'eftazima' or 'afrena', that are flavoured breads that are leavened with foam cooked.

Kos is the idea island for a quiet vacation. Even though, there are some places not suitable for families or those who want a low-profile vacation. You'd better avoid Kardamaina village during evenings or nights, as it's full of tourists with extreme behavior.

Kos, as most of Dodekanisa islands, has suffered many times from fires, so local authorities have cracked down. Don't start fires on the woods and avoid to leave garbage behind you, as penalties are too high in both cases.

Ferry tickets and offers to Kos

Search all the ferry itineraries and cheap tickets for Kos in Aktoploika.gr. Online boat tickets at the best prices, search for the special offers, for the Piraeus – Kos journey and other itineraries and win from the specially discounted prices. In our site you will find all the ferries for Kos as well as the speed ferries. Cheap ferry tickets to Kos.