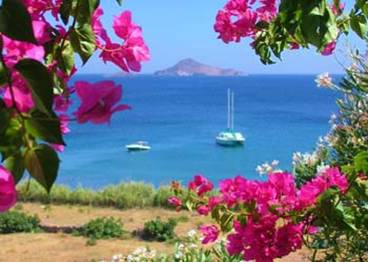 The "sacred" island of the Dodecanese is no other than Patmos. Patmos is known as the island of Apocalypse of Ioannis and has numerous believers who visit the Byzantine monastery of Agios Ioannis Theologos and the cave of Apocalypse. Patmos, of course, has amazing beaches that make it even more attractive to visitors. The small gulfs, the quiet beaches and the crystal clear waters of Patmos impress even the most demanding visitors. Petra, Livadi, Agriolivado and Kampos are some of the most beautiful beaches of Patmos. The island's Hora has lots of taverns, restaurants, cafes as well as bars. The atmosphere on the island is relaxed and peaceful and the locals hospitable and gracious. In Patmos you will spend unforgettable holidays and you will enjoy every minute so wait no more, book your ferry tickets now.

There are regular ferry departures from the port of Piraeus for the port of Patmos and the journey, including stops at other islands, lasts about 10 to 15 hours. In fact, by booking your ferry tickets online via aktoploika.gr your journey will be even more relaxed and carefree. The island's port, Skala, is 3 kilometers away from Hora. Near Skala, there are several beaches, like Aspri and Merikas.

You can now book ferry tickets online for Patmos via Aktoploika.gr. If you plan to travel during July and August, it's best if you have booked several days or weeks earlier to avoid hitches. You should also know that round-trip/return ferry tickets come with a considerable discount.

Transportation in Patmos
There is a bus with itineraries from Hora to Skala and vice versa as well as to some areas in Patmos. You will also find several taxis that can take you to your destination easily and comfortably. Additionally, you can visit some of the beaches of the island by boat while you can also rent a vehicle from the car and motorbike rental agencies on the island.

Patmos is a "zero criminality" island, with great hospitality and a good road network, so any transportation way (even hijack) is ideal. The local buses network, resting upon frequent routes, covers all settlements' needs, as well as access to the island's most beaches. Those beaches that can't, or is dangerous to, be reached by land, using one small boat is suggested. The buses' tickets isn't more than 7 euros, while you can buy it inside the bus too. More routes to specific popular beaches are added during summer months.

The sacred island of the Apocalypse is waiting for you to walk in the paths of faith, with its beautiful beaches, the separate flavors, the holy traditions and the atmosphere of calmness that it offers. It is worth visiting Chora, one of the most beautiful of the Aegean, with impressive houses and mansions, Saint Levia's square and the square of Loza or City Hall square, the Virgin's Cemeteries and the church of Diassozussa. Also visit the Nikolaidis mansion of the 18th century, which today operates as a Museum, and the Patmian School, which was built on the rock of Apokalypsis 1669.

In Skala, the more 'touristic' settlement of the island, visit the square with the church of St. John the Baptist, the lighthouse and the area Konsolato. Kastelli, the hill above the bays of Skala, Merika and Choclaka with relics of fortifications from the 4th century BC. Saint Nikolaos, in Evdilos, built in 1083 by a sailor who was pulled out by the storm in that place. Stavros, chapel of five centuries, located in Diakofti. The most ancient Hermitage or Kathisma, as the locals call it, is located in Petra, on the rock Kalikaltsu. And the Christ of the Plain, one of the oldest churches of the island.

Start your tour from the monastery of St. John theTheologian. Designated as a world heritage monument by UNESCO, founded in 1088 and is consisted of buildings of different eras structured in a layered and complex fortress with walls 15 meters height. The monastery is a part of the  the Ecumenical Patriarchate and has a ten chapels and 99 cells. The Museum-ossuary is housed in the old monks ' cells. Here you will see, among other things, the purple code  parchment containing the Gospel of Mark, the golden bull of Alexios Komnenos and the icon of Christ Elkomenos. The Annunciation is located to the southwest of the Chora. Its "seat" was built in 1613, but the monastery was founded in the 20th century. It has a three floor defensive tower with the chapel of St. Anthony.

The Monastery of Zoodochos Pigi is located to the southwest of the Grand Monastery founded in 1607. In the middle of the path between Chora and Skala, there is the cave of the Apocalypse, where St. John the Theologian lived during its exile and wrote the book of the Apocalupse. 43 stairs lead to the interior of the cave. Two hiking trails which you should not miss are the following: From Chora you can go down the ladder from the old Aporthiano or Aportsiano path, which starts from the Mills and offers panoramic views over the valley of Perdikari, Skala, Chora, the Apocalypse and the sea. The journey lasts half an hour. Chora-Evangelismos-Gardens. A downhill path that starts from the monastery of the Holy of Holies, passes from the monastery of the Annunciation and ends up in the Gardens of Saints, as it is said the area with 'seats', the old hermits' cloisters.

Lampi beach is famous for its beauty, which is due to the pebble's countless colors. During the last years collecting them isn't allowed and the place is under supervision.

Most famous beaches may be preferable to be visited in the morning, so you can find free deckchairs and avoid the noon's crowd. In some of them, like Psili Ammos, you'll have to leave your car and walk the last meters. Whatever your choices are, make sure you are informed before going there.

Ferry tickets and offers to Patmos