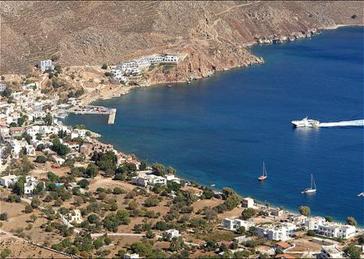 Tilos is one of the small islands in the Dodecanese but still it has numerous natural beauties, a developed touristic infrastructure and intense nightlife. The countless churches, the Castle of the Knights, the Cave of Harkadiou with the fossils of the pre historic dwarf elephants, the Castle of Misarias in combination with the amazing beaches make the ideal holiday destination. In Tilos you can enjoy diving, fishing and you can naturally swim and sunbathe at organized or more secluded beaches. In the summer nights the taverns and the bars of the island are filled with people having fun until daylight. In Tilos you will spend unforgettable holidays so wait no more, book your ferry tickets now.

There are regular ferry departures from the port of Piraeus for the port of Tilos and the journey, including stops at other islands as well, lasts about 15 to 17 hours. In fact, by booking your ferry tickets via aktoploika.gr your journey will be more comfortable and carefree. The port of Tilos, Livadia, is 6 kilometers away from Megalo Horio, the capital of the island. In Livadia there is a beautiful beach as well as several restaurants and taverns.

You can now book ferry tickets online for Tilos via Aktoploika.gr. If you plan to travel during July and August, it's best if you have booked several days or weeks earlier to avoid hitches. You should also know that round-trip/return ferry tickets come with a considerable discount.

Transportation in Tilos
During your stay in Tilos, you can go everywhere on foot as the distances are not very long and you can access the beaches of the island by boat. You can always rent a motorbike, though, for even more comfortable and free traveling.

Tilos' way of life is too slow and transportation couldn't be an exception in this. The one and only municipal bus continuously connects (about every two hours per day during summer) Megalo Chorio, Eristos, Agios Antonis and Livadia Village. During the last days of July more buses are added to fulfill the increased transportation needs, due to the famous Agios Panteleimonas Festival on the 27th. There is also bicycle, as an alternative way of transportation, as well as small boats, which you can circumnavigate the island with, that will also take you to small beaches.

Tilos is an island full of aromas and birds and has been inhabited since the ancient times. Caves, beautiful beaches, fertile areas of Eristoy, St. Anthony and the Big Village. Livadia, the island's port, will welcome you to wander around its 16 habitats! Tilos, Antitilos and 6 other islets are included in the Natura 2000 network.

In the spring on the island, a flowery carpet is formed . The low vegetation includes plants as phlomis fruticosa, alfalfa, mullein, bellflower, 28 orchid species, tsikudies (gramithies), the lilies of the sea, the moschagkatho and the wild tea. Also, you will find citrus, olives, walnuts and hydrophilic planes. The Mediterranean Monk Seal finds shelter at least in five resorts, and on nearby islands. Near the coasts, a very common phenomenon, is to see dolphins. The waters around the island becomes are ideal for fishing. In the quiet places you will find rattus rattus, hedgehogs and wild rabbits, which are eaten be the Bonelli's Eagles and the Long-legged Buzzards of the island. As the island lies on the path of migratory birds, more than 100 bird species have been recorded and is a suitable place for bird-watching.

Spend some time to visit the deserted Mikro Chorio, which has been declared a monument of culture. It was built by the Knights Hospitaller in the 15th century. Megalio Chorio, with the ancient castle that dominates at the top, but also many small 15th-century churches with important frescoes. The monastery of Saint Panteleimon, was built in 1470 and was renovated in 1703 and 1824.

The island has developed animal husbandry, so you will taste delicious lamb with potatoes or stuffed with rice, pork, yiaprakia, kavurma with wheat in the oven and kulusufades or pumpari (pork or beef intestines stuffed with minced or livers, rice and spices). Of course, the fish lovers will enjoy fresh mullet or tuna. Also look for the tsuvra (tomato soup) and the wheat grains (chopped wheat cooked in water or milk). From cheeses taste local cheese or hard cheese or the hard Tilian cheese and from pastries, donuts, xerotigana, melekunia, stuffed figs, sweet pies and cookies 'eftazima'.

Ecological conscience is more than developed here, so be careful not to leave any garbage on the beach and have a bag with you, to carry them away, until you find a dumpster.

Hat and sun-screen are the most necessary objects here, rather than anywhere else. The island has very few shades. If you decide to walk through one of the many paths, make sure to be protected by the sun and have water with you.

Tilos has successfully made the first herbs cultivation steps, while there are many small groups of birds living here, thanks to humans' respect.

Ferry tickets and offers to Tilos