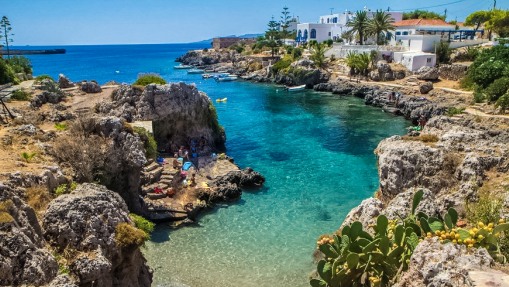 It's hard for someone to find a word, to describe Kythira (Kythera). Only the fact that the name "Kythira" is one of the 7 oldest Greek toponymies, as it was found written on a 1400 b.C. Egyptian status' socle, proves itself the island's long-aged history and the cultural and customs pluralism, as well as its morphological assortments. Perhaps the word "unexpected" can partially restores this strange and magnificent land's nature, preparing any visitor of what he'll see, hear or live here, the meeting point of three seas, the pass from the East to the West and from the North to the South through centuries. Perhaps that's the reason, Kythira was and still is many artists' and originators' shelter of inspiration and creativity. Here you'll find the most herbs, flowers and passage birds in Greece. It is here, that innumerable geological finds witness the huge realignments, that took place thousands of years before. It is here, in Kythira, that visitors will discover one of the World's History's greatest inventions, the Antikythira Mechanism, the first device, that specifically recorded geographical spots, an "ancestor" of today's GPS, that was made over 2000 years before. And if we add to all these the multi-various landscape, sometimes traveling us to forgotten knights' and pirates' ages, sometimes revealing a cosmopolitan aura, exotically colored and charming, the folklore settlements' illustration, the seascape's and the landscape's imperial grace, we'll be able to understand, why Kythira, even though it remains fame, has been established to every visitor's soul, as the ultimate travel destination.

Kythira's main port is located at Diakofti, about 30 kilometers away from the island's capital. On the port's dock, you can find buses or cabs, ready to serve you. The port is coastal connected to Piraeus, Neapoli, Gytheio and Crete's Kasteli (Kissamos). You can now book your ferry tickets online via aktoploika.gr for a journey more comfortable and carefree. The journey from Piraeus to Kithyra lasts about seven and a half hours. Kithyra has also some other, smaller ports, like Avlemonas, Agia Pelagia, Platia Ammos and Kapsali. Many cruise-ships stops at Kapsali Port, as they cross the Mediterranean Sea and many yachts prefer it for anchorage. You can also get to Kythira by air, from "Eleftherios Venizelos Airport", as well as from Irakleio, Kefalonia, Corfu, Zakynthos, and Aktio, or you can take a bus from Neapoli Lakonias.

Kythira has also a ferry connection with the following ports: Piraeus, Gytheio, Neapoli and Kasteli at Crete (Kissamos).

You can now book ferry tickets online for Kythira (Kythera) via Aktoploika.gr. If you plan to travel during July and August, it's best if you have booked several days or weeks earlier to avoid hitches. You should also know that round-trip/return ferry tickets come with a considerable discount.

Transportation
The best way to move in Kythira is renting a small 4x4 vehicle, so you can have access to everywhere, due to the fact there are many inaccessible roads with big slope. There are also bus schedules, connecting Kythira City with the island's villages. If you want to enjoy the well-hidden and unreachable beaches, you'll have to rent a small boat.

Kythira's geographic relief makes transportation interesting as well as ...adventurous. Most of the settlements aren't serviced by constant transportation, except summertime of course, when routes' frequency is increased from and to the most crowded destinations, the port and the airport. All villages have bus stops, where buses pass from, as well as on the settlements' main crossroads. These routes are regularly announced before summer and you can be informed on www.kythera.gr As for the most secluded and inaccessible beaches, you'll have to use the local sea-taxis, with ticket price no more than 5 euros.

Kythira (Kythera), is the only island with a view to three seas, the Ionian, the Cretan and the Myrtoo. It took its name from goddess Aphrodite, who was named, in Orphics, as well as in Iliad, as "Kytheria", meaning "she, who has something in her bowels". Kythira's latest name "Tsirigo" was born due to lingual distortions of the primal name "Kythira" through ages.

When a visitor says the word "sights", the natives smile: "Kythira Island is by itself a big sight", they say. And you can see that, no matter where you are, in the illustrations', the sounds', the smells' and the scenes' abundance. Kythira's villages are a great folklore settlements example, while (thankfully) touristic development got here too late, so most of them are untouched. Mylopotamos Village, on the west, with its natural springs and perennial plane trees, is worth to visit, as well, as Avlemonas, a fishermen's village with intense Cycladic style, and Karavas, with its underground springs, surrounded by virgin nature.

Other mentionable sights are Gerakari, a big forest on the north, covered with pine trees and eucalyptuses, Neromyloi on the west, with its perennial plane trees, waterfalls and physical lakes, Agia Sophia Cave on the west also, with plenty of wall paintings and a small temple inside it, Hora Castle, built by the Venetians with a view to the three seas and Kato Hora Castle, Venantian too, near Mylopotamos. You can also visit Panagia Myrtidiotissa Monastery, Kythira's patron saint, the Moudari Lighthouse, Katani, Greece's longest wooden bridge from Anglocracy till today, and, next to it, the Byzantine Wall-paintings Museum. Don't miss the Minoan Top Sanctuary, built on the top of Agios Georgios Hill, with plenty of archaeological finds, proving Kythira's primordial defrayments and long history.

Inevitably, an island with such a multifarious natural and cultural "decoration", can't remain in beaches, as it satisfies any visitor's desire. The most known beaches are Diakofti, next to the Port, Agia Pelagia, a long beach with many facilities, Kaladi, one of Kythira's most famous, Palaiopoli, the biggest one, Kalami, surrounded by rank, Hytra, Kyriakoyloy, Loutra Aphroditis and Steno Avlaki, all of them inaccessible and isolated, and Lykodimos with its weird geological formations. Finally, Fyri Ammos, one of the greatest in the island, Lagkada Beach and the cosmopolitan Kapsali were both awarded with the " 2016 Blue Flag Award".

Before you leave Kythira, don't forget to buy thyme honey, awarded as the "Best Greek Honey", olive oil and a flower pot with Amaranta of Kythira, a rare flower, that lives eternally, as his second name (Sebrevives) says. You can find Amaranta in steepness places, or you can buy them from a local store. Visit Kythira, the island, where Cycladic, Ionian, Minoan, Byzantine and so many other cultures coalesce and become one, and surrender to this majestic journey in time and sensation.

Kythira Island has many dirt roads, so if you rent a car, make sure it'll be a 4x4. In some beaches you'll have to walk too, so make sure you have all the necessary info before you arrive there, especially if there are elders and children with you.

Use your smartphone's map or your GPS device and save every course you make, so you can restore it later and find your way home easier. Do this, because some crossroads may disorient you and many dirt roads don't have any signs.

Melidoni Beach is one of Kythira's most beautiful beaches. You'll probably read in many travel sites, that the road is OK, even locals may agree in that, but – please believe us – you'll definitely need a 4×4 vehicle to get there.

Ferry tickets and offers to Kythira