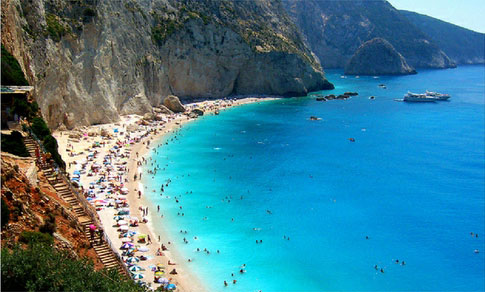 Lefkada (Lekfas), homeland of two great Greek poets, Aggelos Sikelianos and Aristoteles Valaoritis, is the only Greek island with  a road access to the mainland, that's why local people call it "the landlubber island". The most preferable and most known way to get to Lefkada is using the road, that connects Vonitsa City with Lefkada City. You can also travel by airplane, to get to Actio Airport and then continue your trip by car or bus. What separates Lefkada from other islands is not only it's multifarious landscape relief, but also it's intense cultural action, during summer mainly, with theatrical acts and performances, concerts, folklore customs representations, lectures, exhibitions and many other events. The Speech and Art Festival, the Valaoritia Festival, Agios Donatos Festival and the representation of the Lefkadian Marriage Customs at Karies, attract many visitors, who choose to combine summer vacation's jauntiness and relaxation with a few notes of culture and entertainment. On the other hand, Kathisma, Egremnoi, Porto Katsiki, Vasiliki and many other beaches guarantee unforgettable relaxing time, where natural beauty becomes one the blue -green waters of the Ionian Sea. Mpakaliaros Bianco, frigadeli, burdeto, maridopita and the famous Eglouvi lentils, are some gastronomical enjoyments, found only here, that complete this elaborate mosaic, by satisfying all senses, placing Lefkada among top destinations for quality vacation. The holidays in Lefkada will be amazing so book your ferry tickets now and live unique moments on this magnificent Ionian island.

Although Lefkada City is the capital of the island, Nydri Town is Lefkada's focal point, with many cultural events during summer, many souvenirs and folklore art stores, traditional taverns, but also with a port, that connects Lefkada with Kefalonia (Sami Port) and Ithaka during summer. In that case, you can book your ferry tickets online via aktoploika.gr for a journey more comfortable and carefree.

During summer there is a schedule from Vasiliki (Lefkada) to Fiskardo (Kefalonia), as well as from Nydri is connection with Sami (Kefalonia) and Ithaca.

As far as it concerns the "Nydri – Kefalonia – Ithaca" schedule, you can now book ferry tickets online for Lefkada via Aktoploika.gr. If you plan to travel during July and August, it's best if you have booked several days or weeks earlier to avoid hitches. You should also know that round-trip/return ferry tickets come with a considerable discount.

Transportation
There are only two ways of moving in Lefkada, the first one is by bus. There are bus stations in Lefkada City and Nydri with daily schedules to all villages. You can also rent a car or a scooter, but be careful on the road, because most of Lefkada's roads are very narrow and full of turns. Finally, at Nydri Port, small boats have a daily schedule to some places, that can't be reached by land.

Lefkada Island has one of the most well-rounded transportation systems, covering even the most distant village. The buses' central station is at Lefkada Town, by the port, making the passengers' transportation easy and joyful. The tickets' cost starts from 1.80 euros (for destinations up to 14 km) to 3.70 euros for more distant places. You can buy your ticket from the bus station, or even inside the bus. You can also book your ticket online at www.ktel-lefkadas.gr

Lefkada: a hive of culture in a blue-green background

Lefkada owes it's name to the white color of it's highlands on the west coast, a fact that scared pirates in Ancient Times, so the island was prevented from barbarian invasions. In old times, its name was "White Stone". Even though it's the fourth in stretch island of Ionian Sea, Lefkada has nothing to be jealous of, comparing to the other islands, due to its number and quality of sights, that satisfy even the most demanding visitor.

Starting from the east coast, it's worth to mention Tempelis Beach at Ligies, Episkopos Beach, Nikiana Beach, a group of many small and narrow beaches, Desimi Beach, Mikros Gialos Beach and Ellinika Beach, where there's an organized camping. All the beaches on the east coast are reachable and visitors-friendly.

As we go on the west coast, there's a big change in the landscape, which becomes inaccessible and, in some cases, vertiginous, but with such a beauty, that compensates visitor in a unique way. The most important beaches, that have to be mentioned is Lagadas Beach, 4 kilometers long, Mylos beach, Agios Nikitas Beach, Gialos Beach and Caco Dukato Beach. Kathisma Beach, Egkremnoi Beach, tough to be reached due to the fact you have to walk down many steps, Porto Katsiki Beach and Vasiliki Beach guarantee indelible pictures and awe, as they're concerned as Lefkada's most beautiful beaches, being on the top of several lists about World's most beautiful beaches.

The first sight one can see, when he arrives at Lefkada, is Agia Mavra Castle, the first building at Lefkada's entrance, where the narrow streak of land, connecting the island with the mainland, ends. This castle played for many centuries an important role in Lefkada's defense to barbaric invasions, as it was the place, where the capital of the island was transferred for a long time. That's the reason, many people call it "The Lefkada Castle".

Lefkada city has two mentionable sights, the Archaeological Museum, with plenty of findings from Paleolithic Ages to Roman Times and the Monastery of Faneromeni, built on the top of a hill, 3 kilometers away. Duo to the fact Panagia Faneromeni is Lefkada's patron, it is the island's sacred focal point. Inside the Monastery there is an Ecclesiastic Museum with many curios.

As we leave Lefkada City, there are many options in sightseeing. We can notionally mention the ruins of an ancient city called Nirikos, the Cyclopean Walls in Kouloumos, the Kariotes' Salt Pit, the Demosaris Canyon at Rahi, with it's small waterfalls, the Ellomenio Museum with folklore exhibits, the Folkoric Museum of Karia, the  Hirospilia, with plenty of ancient settlements, and Papanikolis Cave in Meganisi Island, which took it's name from the legendary Greek submarine of Hellenic Navy, that resorted there during World War II.

Lefkada, mostly during summertime, is the center of many cultural and folklore events. The famous Speech and Art Festival, with many theatrical performances, concerts, exhibitions and forums in many different places across the island, possess the biggest part in this "cultural map". Agios Donatos Festival, that takes place in Egklouvi Village at the 6th of August, is also very popular, as well as the representation of the Lefkadian Marriage Customs at Karies, on August 11th.

Whatever your choice is, Lefkada promises to compensate you with it's citizens warm, authentic hospitality and it's boundless natural and spiritual wealth.

Some beaches are hard and tiring to be reached. Those you must watch your step and reconsider of visiting them – especially if you have oldsters or children with you – are Egremnos (a tough path full of steps and turns), Porto Katsiki (you'll need to cross 100 steps two times), Gialos and Mylos (you'll have to leave your vehicle many meters away and walk).

In some beaches, like Kathisma, sea becomes suddenly extremely deep and huge waves are flowing when the wind blows. Have in mind not to get too far from the coast and always have a good sense of space.

If you don't like crowded beaches, you must choose those that are accessible only by sea. In case you want to visit the most popular, it's better to be there before 9 o' clock in the morning, to find an umbrella and beach-chairs.

Ferry tickets and offers to Lefkada