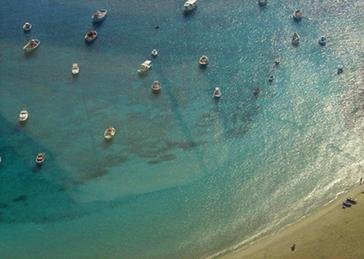 The group of islands, known as Fournoi, is islets at the non-profit line. Fournoi and Thymaina are the only inhabited and offers their visitors an excellent stay away from the noise of the big cities. In Fournoi, you will find quiet and secluded beaches with crystal clear waters. You can easily visit the beaches close to the harbor and more distant as well by boat. You can eat fresh fish and enjoy your drink at the few bars with the beautiful sea as a view. The traditional, full of flowers, little houses, the tiled alleys, the little taverns, the windmills and the relaxed atmosphere of the island will enchant you and you'll not want your holidays to be over. Book your ferry tickets as quickly as you can and enjoy unique holidays in Fournoi.

There are frequent ship departures from the Piraeus port to Fournoi with the journey, which includes stops to other islands as well, lasting about 12 hours. For a carefree journey book your ferry tickets online via aktoploika.gr. The island port is in Hora which is also named Fournoi. During the last few years, more and more ships keep coming to the island that is being developed in terms of tourism and offers alternative holidays.

You can now book ferry tickets online for Fournous via Aktoploika.gr. If you plan to travel during July and August, it's best if you have booked several days or weeks earlier to avoid hitches. You should also know that round-trip/return ferry tickets come with a considerable discount.

Transportation
The distances on the island are small so you can enjoy walking. Naturally, there are boats that can take you to the more secluded beaches of the island. Fournoi is an island, that could have a basic transportation network, but the roads' condition (most of them are earthy), the small population and the lack of necessary substructure, haven't allowed this until today. Beside the known transportation vehicles, available for rent (cars, scooters, bicycles) there 1-2 fishing boats, that may take you to some beaches, as well as to Thymaina Island.

Anthem to the island life

This small archipelago consists of a cluster of islands, over twenty, with larger the Island of Furni, Thimena and Saint Minas. Furni have approximately 2,000 permanent residents, while Thymaina is inhabited too. Full of coves that create natural small ports for ships and with an entire fleet of fishing vessels, Furni seem to come out of an oil painting, anthem to the island life!

Isolated beaches, in most of which you can arrive by boat, and plenty of fresh fish and the famous lobster complete the heavenly image. The Chora of Furni is a traditional village with small picturesque paths, traditional architecture and a square with towering trees. At a distance of about a kilometer, there is Kambi, a small settlement at the entrance of which you will be welcomed by three windmills, while Chrissomilia is the second big village of Furni, to the north of the island.

In Fournoi you will have the opportunity to honor the 15th of August in the feast of Virgin Mary in the square of Furni, while on August 28, the feast of Saint-John Apokefalistis in the precincts of the Abbey in the village of Saint John Thermastis to the south of the island. Also, don't miss the feasts of St. George and St. Nicholas in Thimena.

Fournoi island hosts many sea genres, including a rare , endangered species of seagull. The rules of sea-protection are very strict and stipulate heavy penalties for those who pollute the sea.

The island is so small, that you'll surely cross it on a bicycle or by foot. There are a few trap-spots hided in some courses, mostly on steep coasts and rugged paths. Don't step any further, unless you are sure about your experience in such terrains or your shape allows you to.

Ferry tickets and offers to Fournoi