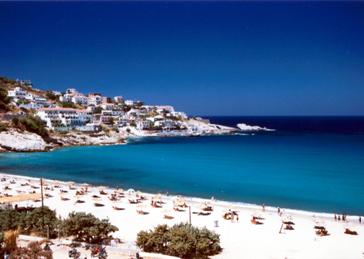 Ikaria is a beautiful island with hard to reach and secluded areas and beaches even nowadays. Spending your holidays in Ikaria will revive you and help you rest. It is a relatively quiet island which certainly offers nightlife as well as lots of festivals and merrymaking. Visit the Archaeological Museum, the hot springs, the monastery of Evaggelistrias but also its seaside villages like the Armenistis and Gialiskari. Ikaria is the ideal island for the ones interested in sea sports, fishing, hiking and exploration of nature. Book your ferry tickets as soon as possible and enjoy unique holidays in Ikaria.

There are regular departures of ships from Piraeus to Ikaria and the route, which includes stops to other islands as well, lasts about 10 hours. Recently, Hellenic Seaways has add a new ship "Nhsos Mykonos" that makes the journey Piraeus - Ikaria (Evdilos) in about 71/2 hours, there is also a ferry departing from north of Greece from the port of Kavala. For a carefree journey book your ferry tickets online via aktoploika.gr. The island's capital, Agios Kirikas, is also one of the two ports of the island. The second one, Evdilos, is located pretty far away from Hora.

You can now book ferry tickets online for Ikaria via Aktoploika.gr. If you plan to travel during July and August, it's best if you have booked several days or weeks earlier to avoid hitches. You should also know that round-trip/return ferry tickets come with a considerable discount.

Transportation
Although there are not enough bus itineraries in Ikaria, you will certainly find several taxis to take you wherever you want at reasonable prices while there are also rental agencies so you can rent the vehicle of your choice and travel with comfort around the island.

In an island with it's own rhythm, with plenty of particularities in residents' way of life, with many paradoxes in their daily habits, transportation couldn't be an exception. Until 2010 Ikaria was one of the very few places in Greece with no public transportation at all, a year that the first attempts to crate one seemed to fructify. The few routes, that serve the island's basic public transportation needs start from Agios Kirikos, while it is filled by some private buses, that cover some routes to specific beaches during summer. You can get more information about routes and tickets prices at bus station in Agios Kirikos.

It may be a part of the prefecture of Samos, together with Furnus and Samos, but Ikaria makes a universe itself. Swim in the same sea with the bottlenose dolphin, the striped dolfin and the Mediterranean seal, cross the verdant canyons, ranging from the slopes of the mountain Atheras, with two peaks up to 1,050 meters. Walk to the mainland but also to the  striking coastal zone, on cobblestones, next to stone bridges, in coniferous forests, in churches and in unique stone houses, windowless, with a small low door because of the fear of pirates. These are just a few, indicative 'touches' of the island.

The island's capital and main port is Agios Kirykos, on the East side, built amphitheatrically, with the Cathedral, Saint Andreas, and the church of Saint Dimitrios with Katafigi, the hatch below the sanctuary, which hid the residents to be safe against pirates.

On the North side, Evdilos, the island's second port, lush, with picturesque houses and picturesque streets. On the hill you will see the castle of Nikaria, built in the 10th century A.C. by the Byzantines. Christ at Raches will surprise you with the perception of the inhabitants for the time. Everything is open only late at night until the morning! At Therma you will find the famous hot springs since ancient times. The municipality has built a cave, in which the visitor can have a hammam and Jacuzzi! Note also, the springs of Asklipios and Lefkada in Agios Kirikos and the sources of Apollo.

Look for the  unique flavors on the island, and first of all the famous Ikaria's wine, known since antiquity. Three wineries on the island and small vineyards on terraces of the local varieties: fokianos and begleri. The camel meat of goat meat, the sufiko, with various vegetables, mushrooms, pickled snails and whatever can be cooked with balm mint (Lemon balm), fennel and poppy.

Don't miss the ikarian feasts with traditional music, the ikarian dance and the 'intent', the food offered at festivals. On August 6th, at Christ of Raches there is one of the biggest festivals of the island. On the 15th August, in Gialiskari, with rasko the island's famous wild goat and ikarian wine. In recent years, each summer the Icarus Festival is a meeting point for all visitors of the island.

Ikaria's waves is an attractant for many surfers all over the world, as well as the only reason to avoid swimming on a windy day. When locals talk about storm and waves, trust them and stay away from the sea.

Access is tough in many beaches. Faros beach is perhaps the most difficult and risky one, as you'll have to cross a steep path at least twice.

The island has a low routine , time has no value and locals don't live as quickly as metropolitan do. Most of the shops are closed during the day and open only during nights. Adjust your habits and wills to these facts and enjoy your vacation in slow motion.

Driving isn't something that differs from the overall routine. Despite of that, you must pay attention, especially during nights, as the roads hide many traps and you'll definitely meet many wild goats.

Locals will surely invite for some "athanato nero" (eternal water), which gives longevity, available in Xylosyrtis. Don't overdo it, as this water contains radium.

Ferry tickets and offers to Ikaria