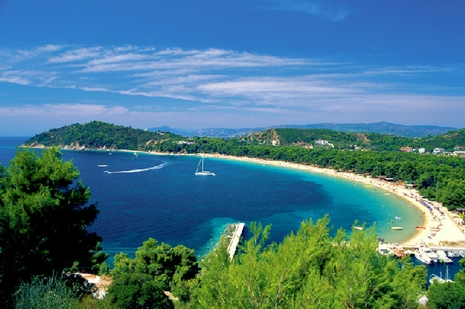 Skiathos is one the Sporades islands that has seen quite an increase in tourism during the last few years. The beautiful beaches with the crystal waters, the natural all-green landscape, the picturesque little villages, the hospitable locals, the developed touristic infrastructure as well as the frantic nightlife are elements that attract both Greeks and foreigners to the island, both families and younger groups. During your stay in Skiathos you can enjoy the sun and the sea at the beautiful beaches of the island, at Koukounaries, Aselinos, Megali Ammo and at any other of the total sixty beaches available you visit. You can also visit Mpourtzi, the Venetian citadel of Hora and watch one of the concerts that take place on the island. You can visit the house of the very loved author Alexandros Papadiamantis, the monastery of Evaggelistrias, the monastery of Kounistras as well as the medieval capital Kastro. The nice and comfortable hotels and rooms to rent on the island, the good food, the rest and entertainment will surely win your heart. The holidays in Skiathos will be amazing so book your ferry tickets now and live unique moments on the magnificent island of Sporades.

There are regular ferry departures from Agios Konstantinos and Volos for the port of Skiathos and the journey lasts about 3 hours. To ensure a nice and comfortable journey book your ferry tickets online via aktoploika.gr. While approaching the island, you can see its port and the land of Skiathos which remains picturesque over the years. More and more ferries dock at the big natural port of the island every year, especially in the summer.

You can now book ferry tickets online for Skiathos via Aktoploika.gr. If you plan to travel during July and August, it's best if you have booked several days or weeks earlier to avoid hitches. You should also know that round-trip/return ferry tickets come with a considerable discount.

Transportation
There are several bus lines in Skiathos with regular itineraries for most of the areas of the island. The green, the blue and the red line depart from Hora and cover a big part of the island. Taxis in Skiathos, available all day, are quite affordable and you can use them to move around. However, in order to explore the whole island you can rent a motorbike or car from the rental agencies or even use boats to visit more distant beaches. If you plan to visit the island during summer, you should book the vehicle of your choice.

Although it's one of the most popular Greek islands, with hundreds of visitors every summer, Skiathos is an island, that requires casualty and patience in your transportation. The roads aren't in the best possible condition, while during July and August there is a lot of overcrowding in the local buses. There are three basic routes, that serve public transportation, the Green, the Blue and the Red one. All of them start at the Primary School Park, downtown, heading to Moni Evaggelistrias, Xanemo and Koukounaries. You also take a sea-taxi, for beaches that can't be reached by land, or for close islands (Skopelos, Alonnisos, Tsougkria). The ticket's cost in sea-cubs varies and can be arrnged.

A vivid and youthful destination of our country, Skiathos highlights the wonderful beaches, the picturesque alleys, the quiet but also rich and intense nightlife.

The town of Skiathos, a modern resort with excellent tourist infrastructure, is the only settlement on the island. Located to the southeastern end of the island in a windless bay which divides in two the island of Burtzi, the village is relatively new since it was built around 1829-1830 in the place of the respective ancient city. Landmark has always been the great natural port, which regulated the life of the city in the past and during the later years. Today, is a quintessential Yacht Haven, something that gives to the island a strong cosmopolitan character. Walking around the village, the visitors are enchanted by the paved pedestrian streets, the whitewashed houses with the tiles, the picturesque port that is insured by four green islands and the gorgeous Bourtzi.

Among the major attractions of the town, stands out the house of Alexandros Papadiamantis. Burtzi is a small wooded island with the ruins of a Venetian fortress and the neoclassic buildings of the old school housing the cultural center of Skiathos. This small peninsula, which divides in two the port of Skiathos, was formerly a fortress founded by brothers Ghizi, who conquered the island in 1207.

Famous for its beaches, we distinguish the beach of Lalaria. Here you can arrive only by sea. Can be called worthy of the that happens by visitors. Its ultimate feature is the huge stone with the hole in the middle, which is offered to be photographed with it. It is covered with round booty and white pebbles, while just behind it stand tall haughty rocks. Located on the north coast of the island immediately after the Nikotsari beach. No umbrellas or chairs, nor canteens, so it is good if have the necessary with you. Koukounaries beach or Golden Sand is surrounded by woods of pine trees and has golden sand.

Banana (or Krassa bay)  is a wonderful piney beach that attracts many young people, as it offers the possibility for water sports and has several restaurants and cafeterias that organize crazy parties! Next is the Small Banana that is more secluded and quiet (once strictly attracted nudists). Like its great ' sister ' , Small Banana is characterized for its turquoise shallow waters and pine trees that surround it.

Nature and hiking lovers, through 25 hiking trails with a total length of 200 km. (with signposted trails lasting 1 to 6 hours), can discover the unspoilt natural environment of the island, idyllic places that offer wonderful panoramic views and places ideal for relaxation and picnicking. The route Aselinos - Moni Kounistra - Mikros Aselinos' beach - Aligaries beach - Kechria beach is one of the most impressive of the island, while the route Saint Helena-Krifi Ammos and Mandraki-Elia-Agkistro will reveal to you great beaches!

Skiathos is one of Greee's most famous islands, with an intense life and an endless "come and go" move during summer. In case you plan a vacation here, be prepared for long lines and crowded places: on buses, beach bars, night clubs, beaches and restaurants. If you can't stand crowds, it will be better for you to plan your vacation on September.

If you use bus to move across the island, especially in crowded beaches, make sure you catch one before 7p.m, after that hour buses are too crowded, a fact that may disturb you.

Driving a car or a scooter will relieve of lines and crowded buses, but remember that there many others like you, who thought the same way. Some roads are too narrow and can't serve so many vehicle. Be patient and take extra care when driving.

Ferry tickets and offers to Skiathos