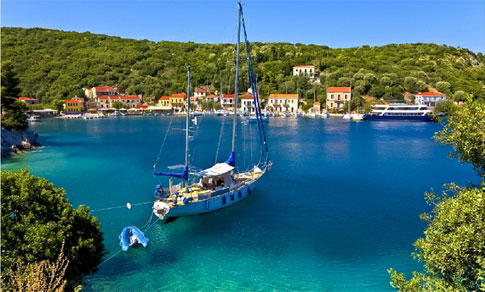 It is indeed hard to find such a small place with such a huge recognition globally, like Ithaca has. Homeland of Odysseus, the great Homeric hero, but also known for Kavafis' famous homonym poem, Ithaca may not be among the most famous touristic destinations in Greece, but is surely a reliable one for someone, who is seeking a quiet, relaxing vacation, with plenty of alternate "escapes", with mountainous or maritime courses. Starting from Vathy, Ithaca's capital and main port, visitors can choose between a dive into the island's crystal water, a tramp through the paths Odysseus walked, or a visit in some of Ithaca's museums, chapels and caves. Life here is so slow and slack and, due to the local's hospitality, it's easy for everyone to become part of this routine and enjoy vacation, quit from any kind of pressure or stress. Keeping its genre and architecture inalterable, Ithaca resists to every touristic development command, having by the same time all the basics for comfortable, reliable vacation, as well as in accommodation, gastronomy, entertainment and recreation. Living in such conditions, most of the visitors, that choose Ithaca for their vacation every summer, realize why Odysseus struggled for about ten years to find his way back to his beloved homeland. The holidays in Ithaca will be amazing so book your ferry tickets now and live unique moments on this magnificent Ionian island.

Vathy is Ithaca's capital and main port, connecting the island with the rest of the world. The main schedule, performed regularly, is from and at Sami Port in Kefalonia, but there are also more schedules, during summer, that connect Ithaca with other nearby islands. The trip from Sami to Ithaca longs no more than an hour. You can book your ferry tickets online via Aktoploika.gr for a journey more comfortable and carefree.

Beside Kefalonia Island, Ithaca is coastal connected to other ports, during summer mostly, such as Zakynthos Island, Killini, Astakos and Lefkada Island (with a schedule from Nydri Town or Vasiliki).

You can now book ferry tickets online for Ithaca via Aktoploika.gr. If you plan to travel during July and August, it's best if you have booked several days or weeks earlier to avoid hitches. You should also know that round-trip/return ferry tickets come with a considerable discount.

Transportation
There are two ways of transportation in Ithaca, by bus, with schedules to all villages, or by car or scooter, that you can rent in a rent agency in Vathy City. Renting a bicycle is also an option, if you prefer a romantic movement, due to the fact Ithaca is a small island with very short courses.

Ithaca is a very small island to take the bus for your transportation, even though, if you have just arrived on to the port and wish to move to a small pension outside Vathy Town, you can take a bus, that connects the port with the mainland, having in mind, that Ithaca's roads are narrow and have many turns, so you may need more time than the usual, to arrive. Due to the island's low visitors' rate and the very few needs, buses aren't such as modern and comfort, as the big cities', but destinations are so close, that this won't be a problem. The starting point is at Vathy Central Square and the tickets cost no more than 2.5 euros.

Ithaca owes its name to King Ithacos, its first settler. Although it's a very small island, it contains over twenty beaches, most of them isolated and without any substructure nor facilities, and some others more inaccessible. However, their incomparable beauty, with Ionian Sea's blue-green water from one hand, and the virgin green, rocky seascape from the other, guarantees unforgettable relaxing moments. We indicatively mention Filiatro Beach, a very popular one next to Vathy City, as well as Gidaki Beach, next to the Port, with access only by sea, Loutsa Beach, placed by the Port also, Dexa Beach, a very shallow one, Sarakiniko Beach, next to Filiatro, Perivoli Beach, totally isolated, Fokotrypa Beach, accessed only by a small path, Keramargio Beach, Afales Beach, Sykia Beach, a small one, located under a huge rock, with sunshade all day long, Marmakas Beach, that owes its name to the totally white pebbles it has, that look like marble pieces, and Skinos Beach, an isolated, narrow beach, with sand and pebbles, where you'll probably have the chance to see a celebrity enjoying the sea.

Beside the many sights related to Odysseus and plenty of chapels and archaeological locations Ithaca has, there are also many natural sights and monuments, some of them uniquely beautiful and valuable.

At Vathy, you can visit the Castle with its two cannons, built at 1807 by the French Army, the Ithaca Archaeological Museum, with many exhibits, most of them from the Geometrical to the Roman Period, the Navy and Folklore Museum, and the Church of Agios Nikolaos, where you can see, among others, an El Greco painting.

Leaving Vathy, Odysseus' Palace is a place worth visit, located near Stavros Village. The most of the buildings are half-crumbled, but you can have a detailed image of the Palace, if you visit Stavros Central Square, where a detailed model of the Palace is established to provide more info.

A few meters away from Vathy, you can see the Nymphs Cave, or "Marmarospilia", containing two entrances, one for the gods and one for the humans, according to the local myth. The Alalkomenes Acropolis or "Odysseus Castle", built at the top of Aetos Hill, on a 378 m. altimeter, offers a great view to Northern Ithaca and Eastern Kefalonia. Palaiohora, or Koukouvata, is another remarkable sight, an ancient settlement, containing plenty of houses and Byzantine churches ruins, which is also known as the main settlement in Ithaca during the Middle Ages.

Other sights worth visit in Ithaca is Panagia Spiliotissa Chapel, a small church built in a rock near Marathias Village, Rizes Cave after Perahori Village, Loizos Cave outside Stavros Village, the Archaeological Museum of Stavros, with many exhibits, most of them from First-Helladic Period until the Roman Times, Karaiskakis' House at Kioni Village, where the great Greek General lived until the 1821 Revolution, and the Privy Museum, before Kalamos Village, with many ancient statues replicas.

We left two sights for the end, each one unique at its kind, which you shouldn't miss. The Pyramids, at Exogi Village, are graves built with mill-rocks, placed one above the other. Menir, located at Anogi Village, are huge boulders, with the biggest one about 9 meters tall, that seem to be chased and placed there by humans, causing many queries and admiration as well.

Whatever your choices are, Odysseus' homeland guarantees an unforgettable vacation experience, as well as unique illustrations to the places the great Homeric hero walked.

Most beaches are rocky or are surrounded by rocks. You better wear sneakers or plimsolls, as walking on flip-flops and sandals is tiring and dangerous.

If you decide to move by a car, a scooter or a bicycle, be very careful and don't speed up. Ithaca has many goats and you'll see most of them on a close turn or jumping in the middle of the road from bushes.

Ferry tickets and offers to Ithaca